Apple Watch pre-order started on April 10, 2015 and late Sunday, Slice Intelligence has carried out a polling to 2 millions online shoppers. They predicted that on Apple Watch 1st day pre-orders, at least 957.000 online shoppers in US have ordered Apple Watch on those days where 62% among them were choosing Apple Watch Sport model. This prediction result does not include pre-order in China and Europe. There has not been an official announcement from Apple yet regarding the Apple Watch pre-order result, but Apple CEO, Tim Cook, told that pre-order that has been going until this time is “great”. That Tim Cook’s statement seems to be correct with the pre-order sale that has reached 1 million in US and it is increasing continuously. It’s also not a final result yet from the 15 countries that have opened this pre-order. This is a great selling type for a new product in Apple product series. It also can be more “great” if the pre-order can be opened in many other countries.

Another interesting things is the selection of straps to match their Apple Watch. From the Slice Intelligence’s prediction through their polling, they found that almost 28% buyers were choosing black sport band. It’s followed by milanese loop with 25%. Special for the sport band itself, white sport band is the second most ordered after black sport band, while the rest colors of sport bands are not really enthused and they are sold around 5% in average. 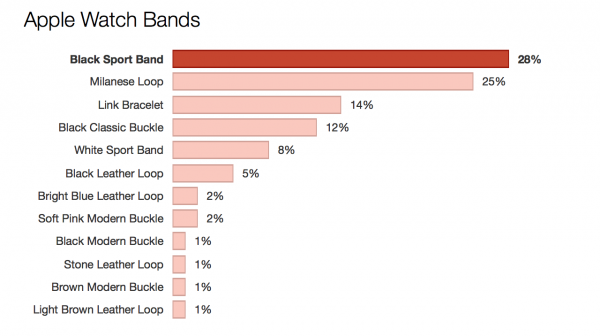