It seems Apple is all set to bring the next big iPhone, the iPhone XL, which will have a larger screen of 6.5 inches. It might be called the iPhone XL, the iPhone 11, or even the iPhone XS Max. We are two months away from viewing the next-generation iPhone for 2018, and there is no proof regarding the features, but the rumor mills are creating a compelling picture, so let's check them out.

It is also possible that Apple could launch three phones this year, with two OLED screen models and a cheaper LCD model. A less expensive model can increase its market.

The first will be a second-gen version of last year's iPhone X model with a 5.8 inches OLED display, whereas the second will be the iPhone X Plus model, having a bigger screen of 6.5 inches OLED display. These two will probably be priced the same as the iPhone X, but the third model of 6.1 inches with LCD will be reasonably priced. Apple is attempting to produce affordable phones with a bigger screen as it wants to make inroads in the Chinese market. 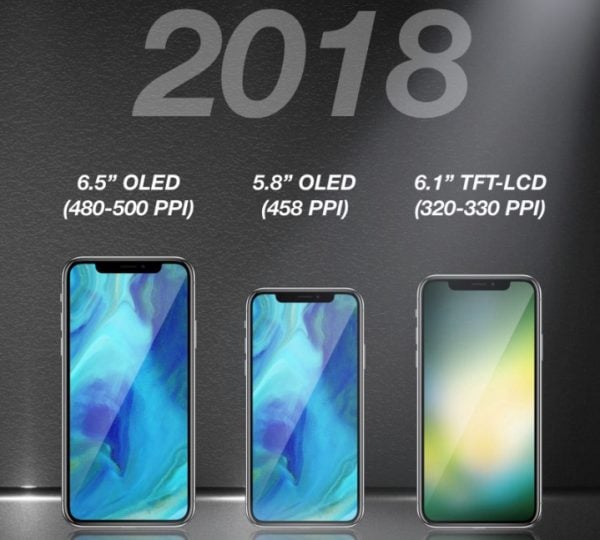 iPhone X to be discontinued

It is also rumored that after launching these devices, the iPhone X will be discontinued rather than reduce the price and sell an old generation iPhone. This is expected, as Apple had done the same thing with the iPhone 5, the iPhone 5s, and the 5c earlier.

According to Ming-Chi Kuo, a KGI analyst who is often accurate, Apple will stop producing the iPhone X beginning this summer. According to him, the 6.1 inches 2018 variant will fill the role of the iPhone X. In addition to this, the iPhone X has not made much of a mark in China due to the size of the phone, as well as the price.

Apple will likely refine the design, add some new features and bring in enhancements with changes in colors, improvement in processing speed, increase in screen resolution and make tweaks to the battery life. It is also expected that there will be hardware upgrades in the form of a complete glass design with a curved display, 3D sensors, enhanced cameras, and so on.

Some pictures have been seen in MacOtakara, a Japanese site, showing some possible features of the upcoming iPhone XL.

According to several sources, Apple will bring in a cheaper LCD screen and two others with OLED screens. According to Wall Street Journal, a more affordable LCD iPhone will sell faster than a costlier OLED screen phone of 2017. The number of LCD phones produced is also expected to be more than the OLED phones, anticipating higher sales for the former.

The OLED iPhones of 2018 will come with a display size of 5.8 inches and 6.5 inches, whereas the LCD screen phone will come in 6.1 inches display and be priced lower. Though the display technology for the lower-priced version is LCD, it is likely to be a Full Active one of Japan Display, which are as good as an OLED display but priced lower. It is rumored that Japan Display is increasing the production of LCD for fulfilling Apple's orders. 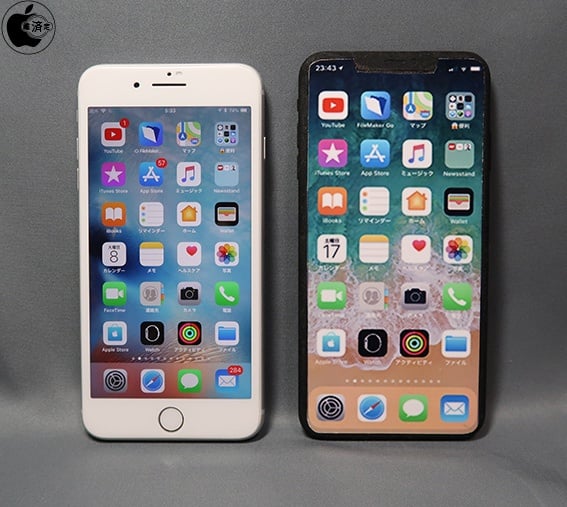 According to news from Ming-Chi Kuo early last month, the case color for the 6.5 inches version could be black, white, and possibly gold. As for the 6.1 LCD version, the chassis might come in colors like gray, white, blue, red, and orange.

When the Apple Watch Series 2 was released in white ceramic color, rumors were adrift that the iPhone XL would also come with the same material. It is more robust than stainless steel. However, some feel that it is unlikely. 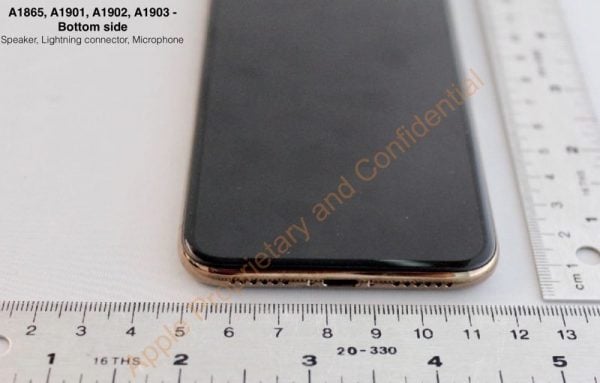 Name of the Next Generation iPhone

Apple has remained consistent in its naming pattern throughout the years. But things started changing after 2017 when instead of a 7s, we had the iPhone 8 and, after that, iPhone X. So will the next iPhone for 2018 be; iPhone 9, iPhone X2, or will it be something else. Depending on the marketing strategy, it could be many other possibilities, like the iPhone Pro or even the iPhone Mother of Dragons.

The next phone can be an iPhone 9 Plus or an iPhone 9 SE. It is also possible that Apple could shift to the S series and name it the iPhone XS and iPhone XS Plus.

In the past, iPhones have typically been released around special events on the first Tuesday/Wednesday in September every year. Past patterns are great to indicate the future, but they may not always be accurate, as Apple could always throw a curveball with a shift in marketing strategy.

As for the design, according to various leaks, the iPhone 2018 will come in three sizes of display screens: 5.8 inches, 6.1 inches, and 6.5 inches. The 6.1 inches design will be the affordable option with an LCD. All the cameras are also expected to come with a full-screen design, using the edge-to-edge screen display.

Several dummies have been seen and can offer a good idea of the expected design. It looks like there will be a single back camera sensor for the 6.1 inches LCD iPhone, with no other significant design changes.

Ben Geskin has shared the dummy models of this year's upcoming iPhones on Twitter, with color options of Black and White. The design for all the three iPhones seems to be similar, with differences only in size. All three iPhones appear to have a notch similar to the iPhone X, but the bezel size is unclear. It has been rumored that the 6.1 inches LCD model will have bigger bezels. The premium variants will also come with a dual-camera setup, similar to the iPhone X.

Based on speculations, all the three variants will come with Face ID, so it is expected that the Touch ID using fingerprint scanning is being phased out. Facial recognition is being used instead, similar to the one seen in iPhone X. According to reports; the iOS 12 will also come with an update for Face ID that helps the phone unlock even in the horizontal position, as the iOS 11 only allows unlocking in the portrait position.

It is also rumored that Apple started production of 3D facial sensors during this quarter. Apple seems confident that Face ID represents the future of security and will include it in the entire lineup this year. Some claim that Apple had originally planned to include both Face ID and Touch ID for the iPhone X, but the technology was not ready then. According to Ming-Chi Kuo, a KGI Securities Analyst, Apple has decided that Face ID will replace Touch ID totally, so all the iPhones of 2018 will come with a TrueDepth camera for facial recognition.

Apple's Face ID technology is very advanced compared to that used by Samsung. It is more secure and reliable. According to Apple, there is only one in a million chance for another person to unlock your phone using their face in the case of the iPhone X, but the chances of unlocking an iPhone with a fingerprint are one in 50,000.

After Apple introduced the first branded SoC in 2010, Apple has always introduced new iPhones with the latest A-series processor. Based on this pattern, it is expected that the iPhone XL will also come with the newest processor, the A11 chipset, as they are the fastest and most powerful and offer greater energy efficiency.

It is expected that the OLED iPhones this year will continue with the dual-lens back cameras and will come with a RAM of 4 GB. As for the bigger model, it will have a bigger battery. At least one model is expected to offer a dual SIM feature. An article published in the 9to5Mac states that the iOS 12 beta 5 provides some clues in the code, indicating that dual SIM will be supported. However, dual SIM support is not feasible now in the US, as no carriers support it, but it might be useful in overseas markets.

All three variants will come with the A12 chipset with improved LTE chips sourced from Qualcomm and Intel for faster LTE.

As for the battery specifications, it is expected that Apple will use the same two-cell L-shaped design for its batteries, at least for the 5.8 and 6.5 models in 2018. The battery life for the 5.8 inches version will be similar to the iPhone X, whereas the battery capacity of the 6.5 inches variant will be increased, as it has more space.

This port is now seen only on the iPad Pro 2015, and it offers power and data connections to keyboards and other accessories. Likely, the Smart Connector might now be seen in the iPhones of 2018. According to The Verifier, an Israel technology blog, Apple will bring the Smart Connector for the iPhone XL. Users will be able to charge their phones with the Lightning Port, which will also help connect with AR accessories.

Apple already had plans for bringing in the Smart Connector, even for the iPhone 7, but at the time, the technologies for AR and VR were not that mature. There are rumors of AR featuring in the iPhones this year, and it will use the Smart Connector. Details regarding AR and VR technology that will be used are unclear, but according to rumors, it will use AirPlay to view simulated information on Apple TV. 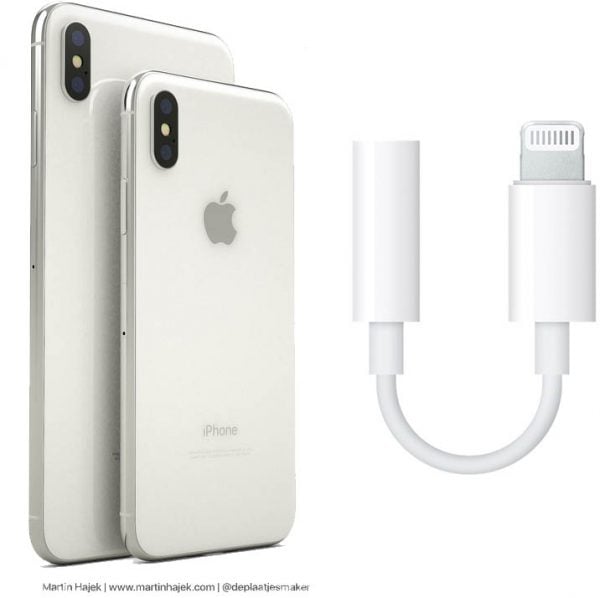 ProMotion displays a refresh rate of 120 times in a second, compared to the previous 60 times. This means that the user experience will be smoother and superior.

There's a chance that the new iPhones of 2018, at least the high-end model, will come with ProMotion technology. According to Ming-Chi Kuo analyst, Apple will have to prepare its ProMotion OLED display for the next generation iPad Pros, which will be launched before the iPhones of 2018. In such a scenario, it stands to reason that Apple will be able to use the technology for the next-generation iPhones this year. One of the main selling points of the 2018 iPhones might be the ProMotion curved display.

The iPhone X comes with the IP67 rating, which means that it is water-resistant and can be submerged in water up to a depth of 1 meter for half an hour. The new upcoming iPhone of 2018, the iPhones XL, might get further water resistance or even be waterproof. The rating might likely be increased to IP68, which means that the iPhone 2018 can be put in 1.5 meters of water for 40 minutes.

According to the financial chief of Qualcomm, Apple is planning to use the competitor's processor, namely Intel. Tests have proved that Qualcomm processors are faster than Intel when downloading data. This could mean that the next generation iPhone X2 could be slower than Android smartphones.

Price of iPhone XL and other models

With all that's said and done, fans will have to wait until September this year to see which of the rumors pan out.